I realize it’s been awhile but I have been trying to straighten some shit out in my life. But all is cool in Avivaland so here we go.

I never hear from any of you; I never get any likes or comments. Please feel free to comment, like/dislike or whatever. I feel lonely here on my high horse.

So, in our new year upcoming, I am making some changes in my style-accepting the gray hairs, never accepting stupidity and totally never accepting the new model of higher ed; pandering to the high school graduates who take our classes so that they can collect a shiny college degree. I just taught a whole semester (and will be going back in the spring) but all of my students LOVED me, except for one. And there is always that one; the one who “payed for this class” but “didn’t learn anything” and asks “why would you hire someone like her?” WOW, a high school graduate who goes to college and still can’t write a decent thesis sentence but refuses to learn from someone who has a college degree (check), 3 masters degrees (check) and one Ph.D. (check). But, as she stated, “she doesn’t know anything about the subject she’s supposed to teach.” OK colleagues, when is enough enough? I had a tenured position, which I quit to take a higher paying position, then had 2 heart attacks, so am now working as an adjunct, but I clearly know what the fuck I am teaching. Why do administrators take this entitled whining so seriously? Are they so concerned about the bottom line? I am glad that I am getting older; I don’t want to live in a world run by such stupid, whiny, spoiled children. And I know I am not alone; why do my colleagues stay silent?

I am baffled but hey, I’ll be dead soon and won’t have to watch as they are overtaken by the Chinese, Russians and all other nations that still do prize learning.

Not much into academia these days. Hard to be into something that is not so into you. After months of devastating soul searching, I realized I was longing to be a part of something and to continue to count, friends, who clearly had no interest in being my friend. I was being “tolerated.” Bullshit! I realized that I was not being grateful for my true friends; friends who loved me for me. So bye to all, and with all in truth, it’s your loss. And, for the first time in a long time I have let go of my toxic baggage. And I am happy a looking forward to waking up every morning.

Sorry I haven’t posted in a while but life gets messed up sometimes. My health issues appear to have abated but in the last 7 months, I have had two surgeries. As our president would say, “Sad.”

Anyway, I am back and ready for more adventures in blogging. The textbook, I co-authored, is in final edits now and looking to be published (finally) in the fall 2019. I am finishing my interviews for a research brief I am writing for Springer on police and the Deaf community, so I am psyched about that. And, I will continue my coursework in ASL and Deaf Studies as well as my adjuncting in the fall.

So that’s my big update, what’s yours? 🙂

via Wow, what a time it has been.

These past few weeks have been filled with so many different things. I was hired to teach as an adjunct and am very happy about that. I have been getting over feelings of depression about my health (thanks to that extra anti-depressive I was prescribed) and I am actually feeling healthier.

But in terms of dealing with all this new-fangled (sorry Granny Clampett) Anti-Semitism? Well, let’s just say that 62 years of being picked on, laughed at, being slyly remarked at and discriminated against, for being Jewish, has finally made me “Hulk out”in total anger and I am proudly an “Anti, Anti Semite.” I don’t hate others for reasons of race, gender, ethnicity, sexual orientation but I fucking hate Anti-Semites! Sorry Jew haters, but I hate you back, more!!!

And all of this sly re-couching of the term and trying to bisect it from being Anti-Israel is simply disingenuous. We know what you mean, despite every other despicable pejorative you throw at us, you can’t say Jews are stupid. Cause we ain’t.

Enough of me ranting, at least for now. I am also very happy with my slight progression as a signer of ASL. I had a dream last night about lexicalized finger spelling and compound signs. I can’t believe I dreamed about it!!! Wow, it was super cool.

“I don’t know, but with the public displays of long simmering anti-semitism, I think it’s time for a “Times Up” movement against Jew haters. It’s not ok, I don’t fear you and I will outlast you.”

I mean it; do anti-semites really think this is all new to us? I am sick to puke (I almost said ‘death’) about the sly, cynical comments made by both disgusting bigots as well as public officials. I am not afraid of you; I do not quake in fear or surprise that people hate Jews. I expect that. But, haters need to know that there are many people just like me-no fear, just waiting. You won’t win in the end.

via Autoethnography is not that strange 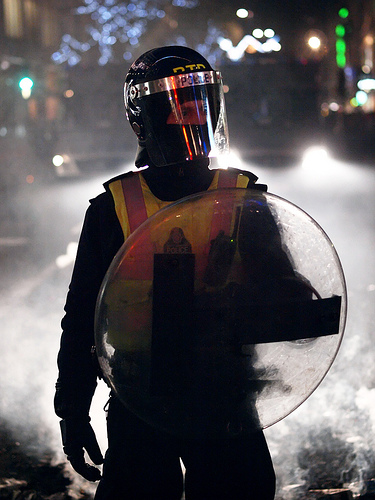 I’ve noticed a disturbing trend in my conversations with peers, especially those involved with the Occupy movement: Many of them have an overtly negative perception of law enforcement officers. I’ve heard officers labeled as heartless, cynical pigs and fascists.

I grew up in a law enforcement family; both of my parents have worked for over ten years in the courthouse 5 minutes away from my house. I’ve known law enforcement officers who have come in all different shapes, sizes, and temperaments. I never saw an overarching negative persona.

But maybe I’m naïve, maybe I’m biased. So I plunged into the  police psychology literature. Does a police personality even exists and if so, what is it? It’s a question that stretches as far back as the late 60s and early 70s.

But much of the research remained inconclusive, unable or unwilling to say if a police personality exists.

The book and the first video discuss the various applications of linguistics, i.e. anthropological, psycolinguistics, etc. I am interested in the phenomenon of psycholinguistics, the relationship between acquisition of language and cognitive structure; how and why a language can have such impact on the self. How does a deaf person decide how to view him/herself based upon their language?

In my work as a researcher in Criminal Justice and Forensic Psychology, I became interested in the self ideation of identified deaf criminals, wherein I hypothesized that criminogenic risk factors would be linked to the acquisition of language in early childhood and resulting self image and socialization. I began to interview deaf inmates in prisons in an attempt to discover how they acquired language (at home from their family or in school) and what their self image is. The subject line of my post is actually a quote from one deaf inmate-who was medically screened and was, indeed deaf-but was a man who did not have a self image of being deaf and never learned sign language. Needless to say, that statement blew my mind, because in my naivety I foolishly assumed that anyone who could not hear knew they were deaf.

So, my question is how does the choice of language influence one’s self image? Rather, why does a person born without the ability to hear identify as a hearing person? Well after some discussion with him, which involved intense eye contact, I learned that this particular inmate has a hearing family, a family that was abusive and neglectful (as he stated) who did not bother to have his hearing screened and was raised to think he was a “retard” and a “dummy” because he was slow to respond and to learn. in a sensible world, his deafness would be primary but unrecognized and his subsequent self image as a damaged “hearing” person” would be secondary. This man skipped over the primary identification as a deaf person and his self image as a damaged hearing person became primary. That is the answer I came up with. His deafness was never identified and thus, never mediated with the appropriate education in a school for the deaf or in an adjacent public school program for deaf students, so he never developed a “deaf” self image-sadly only that of an extremely damaged, hearing person.

The notion that the acquisition of the appropriate language, one that enriches one’s life and accommodates specific communication needs, became paramount in my studies and continues to be one which I study still.

When only nothingness is there.

Red Around the World

Your friendly guide to national parks, road trips, and all things outdoors

The best longform stories on the web

The best of the literary web

Updates on my research and expository papers, discussion of open problems, and other maths-related topics. By Terence Tao

A daily selection of the best content published on WordPress, collected for you by humans who love to read.

The Art and Craft of Blogging

The latest news on WordPress.com and the WordPress community.